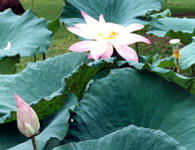 Shin'ichi Yamamoto then moved on to talk about daily Buddhist practice. "The meaning of what President Toda meant when he called himself an upstanding common mortal' is also very profound from a Buddhist perspective. In the context of our actual behaviour, it means a way of life eternally dedicated to learning, development, improvement and seeking the way, while striving toward self-perfection as a human being.

"First Soka Gakkai president Tsunesaburo Makiguchi was always studying. He devoted every spare moment to reading books, even if he was just waiting for the bus. In prison, too, he avidly read the works of Kant and other authors. President Toda was the same. During his stay at the head temple just before his death, he was studying the ancient Chinese work Compendium of Eighteen Histories.

"I therefore wish to proclaim that you qualify as a true disciple of President Toda and a young women's division member when you tenaciously persist in your studies, come what may, for the sake of your growth and development. Faith, practice and study are the basic tenets of our Buddhist practice. President Toda urged the members of the young women's division: 'Make study your foundation.' This is because when you make the profound teachings of the Daishonin's Buddhism the philosophy and backbone of your life, you can attain indestructible happiness.

"The human heart is very easily swayed. Even joy that was once vibrant and alive grows cold with the passing of time. It is the sad way of the world that, especially when persecutions arise, people may come to harbour doubts about faith. During the great oppression suffered by the Soka Gakkai during the Second World War, almost all of A4r. Makiguchi's disciples, except for Mr. Toda, abandoned their faith. They couldn't understand why they should have to endure such suffering when they had embraced faith in order to become happy. However, in the Gosho, the Daishonin clearly states that obstacles will arise one after an another. In the final analysis, those who discarded their faith during the war did so because they hadn't studied the Daishonin's teachings. Stud" illuminates and clarifies the path of faith on which we should advance as Buddhist disciples.

"From now on, the Soka Gakkai will base itself on the two integral pillars of discussion meetings and study. Therefore, I would especially like to ask you, the members of the young women's division, to diligently apply yourselves to your study of the Daishonin's Buddhism."

Shin'ichi spoke frankly about the path that Soka youth should strive for.

"In order to construct a new society, it is important that each of you develop into a person of first-class calibre in your respective field - be it science, economics, education, politics and so on. Instead of being wrapped up solely in the narrow concerns and interests of Japan, you must strike out into the wide world and contribute to the peace and happiness of humanity. This is your mission."

While elucidating the member's profound mission, Shin'ichi also did not neglect to clarify practical matters close to home.

"Youth must have the heart of a lion and confront evil with unflinching courage. At the same time, they must be sincere and earnest in their attitude, always demonstrating utmost courtesy and consideration to others. In our district activities, meanwhile, I would like the youth to serve as the driving force in our discussion meetings, and warmly embrace their fellow members with their youthful and vibrant spirit. The youth are the hope and the life of the district. 'This young person is the pride of our district. Our district is solid because of this person's presence.' Those who are valued in this way by the men's division and women's division members may be called the true leaders of the next generation.

"Discussion meetings are the lifeline of kosen-rufu, a movement promoted by the common people. Therefore, let's ensure that we do not fail to exert our utmost for our discussion meetings, always striving hard to make each one a great success through the efforts of the youth division members"

He concluded his address by saying: "I have profound faith in you. Should I fall in the course of my struggle, I ask that you carry on my aspirations and continue to advance strongly toward the goal of kosen-rufu."

For a moment there was complete silence. Everyone was stunned that Shin'ichi, who was devoting himself unstintingly to kosen-rufu, should be thinking ahead to the possibility that he might not he unable to continue. This glimpse into his innermost heart filled them with deep emotion. Thunderous applause enveloped the hall.

Shin' chi's address conveyed his deep expectations for the youth who would be the Soka Gakkai's successors. The perpetuation of the kosen-rufu movement depended on the cultivation of capable people. Shin'ichi prayed above all that able leaders with genuine lion-like courage would emerge to carry on the Soka spirit.

There are leaders who, wishing to remain secure in their positions of power and authority, deliberately hinder the flourishing growth and development of youth. Others again exploit and sacrifice the youth for own selfish ends, hoping to gain personal glory at their expense.

Shin'ichi, however, was gladly willing to sacrifice himself for the sake of the youth and prayed that they would go on to surpass him - becoming, as it were, "an even deeper blue than the indigo plant itself. (1)

Notes:
1) This allegory of the indigo plant is often used to indicate the disciple growing to surpass the mentor or to describe how deepening one's practice leads to strengthening one's faith.

Back to Home Page